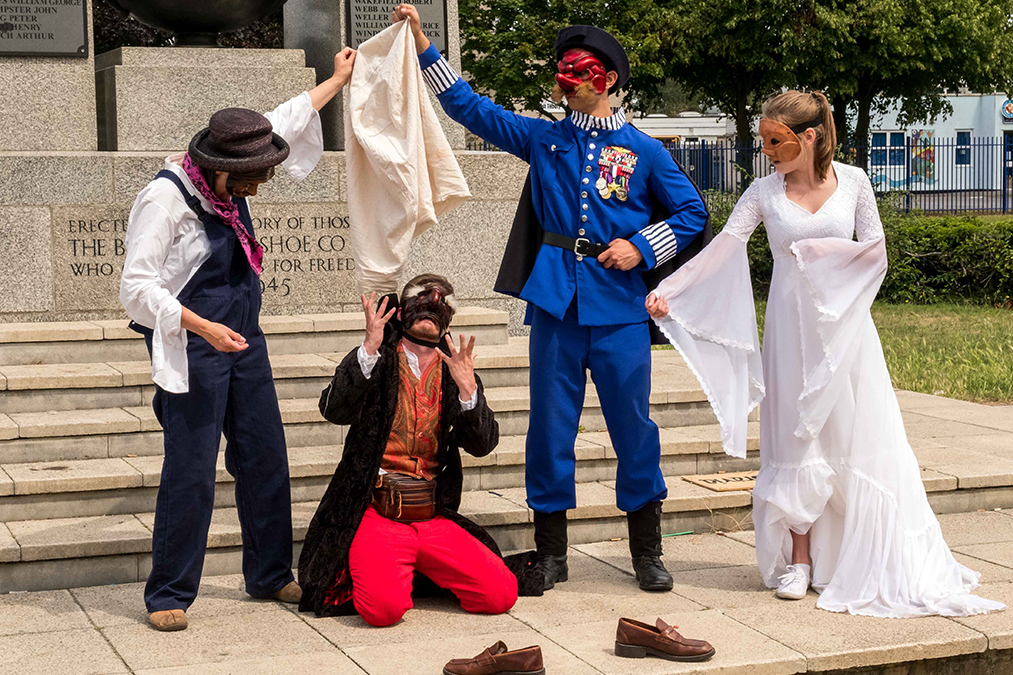 T100 Tales – the stories from 2016 were turned into performances by the Complete Commedia Company who popped up on walks throughout the festival to bring the characters to life. In the 2017 walk archive there are images and details of the performance, as well as a link to song lyrics.

Thurrock 100 returned for a third year in July 2017 after securing funding from Arts Council England and Thurrock Council.

Local arts organisation Kinetika was delighted to announce that the Thurrock 100 walking festival would return in 2017 as Thurrock 100 Tales.  The walking festival took place over 7-9th July 2017 in a number of locations around Thurrock, with the exciting addition of specially dramatized stories performed by the Complete Commedia Company.

Amongst others, there was tales of Forgers, Shoemakers and what happened at Cash’s Well, all told in the irreverent comedy style of La Commedia dell’Arte with a very Thurrock flavour.

Bernadette Wakeling, of the Complete Commedia Company said:  “Performing stories from Thurrock 100 Tales is the realisation of an aspiration. I‘ve always wanted to make theatre about my home that is relevant, current but most of all, entertaining.  Most importantly, it must be brilliant theatre.  What we’ve done to the stories of Thurrock 100 Tales, is utterly faithful but totally irreverent. The historians would shudder at the liberties we’ve taken!”

Fabulous costumes for the performances were designed by Kinetika and students of South Essex College on the Costume Construction Degree, based at High House Production Park.

The Costume Construction course Leader, Rachel Young, explained what it meant for the students to work on a live production:
“Collaboration and working with professional companies is key for students to understand the real pressures and the excitement of working with performers, directors and the pressure of making costumes for an outside show.  Students have studied the background and interpretation of the Thurrock 100 Tales and their design interpretations will be produced by them using the expertise gained through the first 2 years of their degree studies.  Students are excited to create a final product based on the interesting and sometimes odd stories originating from Thurrock and the areas that they study within”

All the stories were taken from the ‘Thurrock 100 Stories’ book that was published by the project in 2016.  Copies of the book were donated to all local libraries and schools and can be still be purchased from Kinetika for £5+postage.  Proceeds of book sales go back to support the project for future years. The stories can also be enjoyed on the interactive Thurrock 100 webpage

Find out more about the Complete Commedia Company HERE.